Skip to content
Loading...
Previous Next
Mobile Usage at the Base of the Pyramid in South Africa

Mobile Usage at the Base of the Pyramid in South Africa 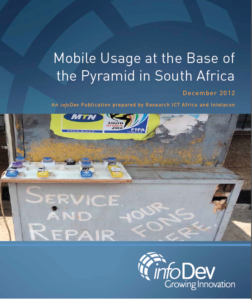 With 6 billion mobile phones around the world, of which 75% in developing countries, telephones reach most corners of the African continent. Mobile phones have improved the lives of the poor. A new infoDev-led study focusing on South Africa, provide insights on how useful mobile phones are for economic and social empowerment of people living of less than $2.50 a day.
The South Africa study was carried out by Research ICT Africa and Intelecon and builds on a broader household survey of ICT usage across 12 countries in Africa funded by IDRC (Canada). The report shows that, in South Africa, even among BOP populations, some three-quarters already have phones, but usage of data applications is fairly low. The one exception here is the MXit social networking platform and there is growing use of other social media, notably Facebook Zero. But other applications, such as mobile money, do not seem to be well targeted to the poor.