The Internet is a network of networks that connects computers around the world to allow people to share information and communicate from anywhere across the globe. The Internet, as we know, is made up of two building blocks: (1) “the network” which is the underlying infrastructure that allows hosts to send information from one place to another; and (2) “the web” which allows users to consume the information in different forms.

Both building blocks are powered by a series of open protocols maintained and developed by open-standards organisations. The Internet Engineering Task Force (IETF) develops and promotes the “Internet standards”, for example, the technical standards that comprise the Internet Protocol suite (TCP/IP) or the Domain Name System (DNS). On the other hand, the World Wide Web Consortium (W3C) supports the development of “web standards” typically implemented by browsers and other applications.

The IETF is a community-driven organisation where there are no formal membership requirements. Any person interested in any Internet protocol may join a working group on an individual basis and propose new standards or best practices or changes to existing protocols. All proposals in a working group start as a draft and are then debated publicly until “rough consensus” is reached. Once the proposal is accepted, it becomes an Internet standard also known as an RFC (Request for Comments). The consensus-building process is central to the work of the IETF and is documented in RFC 7282.

The IETF has an unofficial motto, “We believe in rough consensus and running code”, which means that the implementation experience provides critical feedback to the standardisation process. This particular aspect is promoted via “hackathon” events, which are coding boot camps organised at every IETF meeting and where participants get together to implement an existing or proposed Internet standard. Very often, these implementations are done on existing open-source software packages such as LibreSSL, OpenSSH, etc.

Participation at the IETF is done on an individual basis and authors of an Internet draft (an “active” proposal under discussion, or an “expired” one on which no consensus was reached) provide their contact details, including their current address. Using this information provided, we could infer from which region a contribution came from.

Unsurprisingly, Africa has the least number of documents (drafts and RFCs) as well as the least number of authors from an African country. There are currently 15 RFCs and nine drafts (both active and expired). As of 04 January 2022, there are 9 170 RFCs that have been published, which means African contributions to the IETF are almost negligible (0.26%). 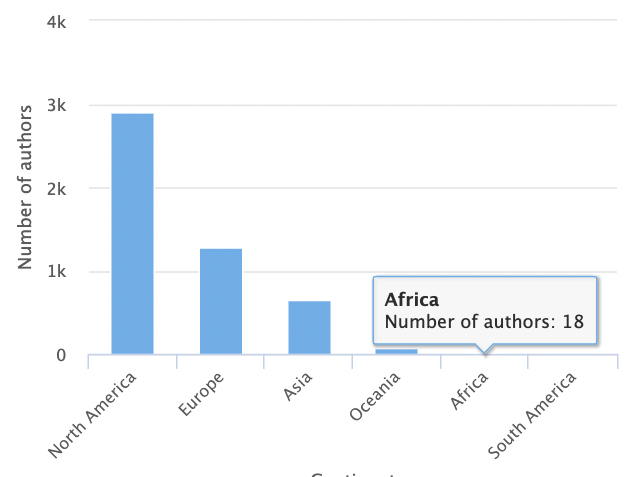 The IETF online data tracker provides the number of RFCs published over time, by continent. The number of contributions from developing regions (South America, Oceania, and Africa) remained consistently low. We can see North America, Europe, and Asia are the biggest contributors to Internet standards.

For a more in-depth understanding of the motivation and challenges, we interviewed four active African IETF participants about their level of involvement and the factors that motivate them to participate in Internet protocols design and standardisation.

One of the motivating elements was “an opportunity to pursue research activities”. While the IETF, traditionally, is mostly attended by network operators and vendors, there are more and more participants from the academic community mingling with the protocol developers. Academics are usually more active on nascent working groups, where there is an opportunity for exploring research and, at the same time, the Internet Research Task Force, which is the research leg of the IETF, also attracts industry researchers and academics.

The main challenges that African participants said they face are:

The IETF and other supporting organisations, such as the Internet Society (ISOC), seem to be aware of these challenges and there are multiple programmes that have been put in place to help reduce these barriers. The ISOC has been providing financial support through their IETF-Africa initiative and has been sponsoring IETF participants. They have also helped organise hackathons at regional events.