The current literature on analyses of African participation in global digital infrastructure reveals very low open-source contribution levels from the continent. The most up-to-date analysis from GitHub’s “State of the Octoverse” in 2021 showed that Africa has only 2.3% of the active users (users making active contributions) on Github compared to, for example, North America with 31.5% of the contributions.

GitHub represents the most significant public repository for hosting open-source software – making up approximately 98% of open-source contributions worldwide. However, the quality of location-based metadata is poor; 33% of authors on GitHub don’t share their location information and there may be more African authors that have not been accounted for in the current statistical analysis.

There are also many challenges to understanding the notion of an African open-source contribution. Software developers can be mobile and may study outside Africa and contribute to a project during their studies abroad, or may constantly be moving between Africa and other parts of the world. How much time should an author spend in Africa for the contribution to be considered African? For the purposes of our study, if in any given year, a user reported their location in a specific country, we assumed that this was their location for that year to generate statistics on the share of contributions from Africa or specific African countries in that year.

We analysed general trends of open-source contributions from African users between 2010 and 2020 and discovered that there has been a general increase in the share of contributing Github authors in Africa, from just under 0.5% in 2010 to approximately 2.7% in 2020. The share of actual total contributions from African authors similarly grew from 0.3% in 2010 to approximately 2.3% in 2020. A “contributing author” on Github is an author that uploads code to Github, rather than a user that simply downloads or uses code. A “contribution” is a single event where a user uploads code or documentation to the Github repository. 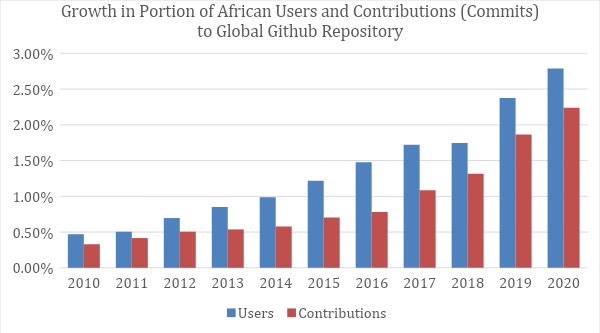 To understand where this user growth is coming from we studied how the share of Github users from each African country has changed over the past decade. The share of Github users was dominated by South Africa a decade ago, reaching over 50% in 2011, but this dominance has been challenged by a rapid growth in open-source contributions from Kenya and Nigeria. Nigeria became the country with the largest number of contributing Github users in 2019, and held that position in 2020, with South Africa in second place, Egypt in third place, and Kenya in the fourth place.

The portion of open-source contributing users in South Africa has dropped to just over 16% in 2020 and the user base has effectively stagnated over the past few years. The cause of this stagnation in South Africa is likely due to a mix of a lack of growth of skilled programmers that make use of open-source tools compared to other African counterparts, and a lag effect of the abandonment of the policy to use open source in government, science councils and universities.