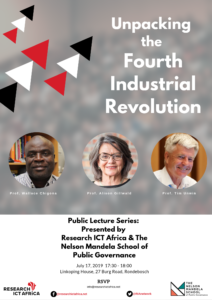 “Is it not time to reflect once more on the true meanings of a revolutionary idea, and to help empower some of the world’s poorest and most marginalised people to create a world that is better in their eyes rather than in our own?” – Professor Tim Unwin

Background by Prof. Alison Gillwald
Since Klaus Schwab of the World Economic Forum’s announcement in 2016 of the impending Fourth Industrial Revolution (4IR) in his book of the same title, South Africa has been swept in the wave of global hype around the extraordinary potential for 4IR technologies – artificial intelligence, robotics, drones and blockchains – and the dire fate of nations who fail to embrace these inevitable technological developments.

There has been a disconcerting lack of critical engagement with the concept intellectually, politically and particularly from a policy perspective. Since the uncritical adoption of 4IR by African National Congress (ANC) at its 54th National Congress there has been no looking back for the country: it has become the mantra of every official event from the State of the Nation to the presidential inauguration, in the context of economic growth, job creation and the empowerment of women and youth.

As the President explained in the first 2019 State of the Nation Address, the Commission would “serve as a national overarching advisory mechanism on digital transformation” that would “identify and recommend policies, strategies and plans that will position South Africa as a global competitive player within the digital revolution space”.

Certainly, with the fast changing, complex and adaptive communications systems that underpin an increasingly globalised economy a national digital policy is essential.  This will necessitate a shift from the sectoral silo in which policy has traditionally been formulated to a national policy enabling the necessary integration required across the public sector and coordination between the public and private sector to meet the needs of a modern economy.

But it will need a transversal strategy that goes way beyond artificial intelligence, machine learning, blockchain and drones. It will require an adaptive governance framework able to engage the entire digital ecosystem in all its complexity; in its local and global manifestations.

Emeritus Professor of Geography and Chairholder of the UNESCO Chair in ICT4D at Royal Holloway, University of London

Tim Unwin  served as Secretary General (formerly Chief Executive Officer) of the Commonwealth Telecommunications Organisation(CTO) from 2011-2015,  and is Emeritus Professor of Geography and Chairholder of the UNESCO Chair in ICT4D at Royal Holloway, University of London. From 2001-2004 he led the UK Prime Minister’s Imfundo: Partnership for IT in Educationinitiative based within the Department for International Development, and from 2007-2011 he was Director and then Senior Advisor to the World Economic Forum’s Partnerships for Educationinitiative with UNESCO. From 2004-2014 he was a  Commonwealth Scholarship Commissioner, serving as Chair of the Commission between 2009 and 2014.

Alison Gillwald (PhD) is the Executive Director of Research ICT Africa (RIA) and holds an adjunct professorship at the Nelson Mandela School of Public Governance (University of Cape Town), where she convenes a transdisciplinary PhD programme focusing on ICT policy and regulation. A former regulator she was appointed the founding Council of the South African Telecommunications Regulatory Authority (SATRA) having headed the policy department at the first broadcasting regulator, the Independent Broadcasting Authority established in the wake of the first democratic elections in South Africa in 1994. She also served as chairperson of the South African National Digital Advisory Body, which reported on digital migration in 2001; the board of the public broadcaster, the South African Broadcasting Corporation; and is currently deputy chairperson of the SA National Broadband Advisory Council.

Wallace Chigona is a Professor in Information Systems at the University of Cape Town, South Africa. He is currently the Director for the Centre in ICT4D at the University of Cape Town. His research focuses on the use of ICTs for human development and ICT policy. He has researched on the use and impact of ICTs amongst the disadvantaged communities in different African Countries. Prof Chigona is on the editorial boards of Electronic Journal of Information Systems in Developing Countries (EJISDC) as well as on the African Journal of Information Systems. Prof Chigona is rated as an Established Researcher by the South African National Research Foundation (NRF). He is the IFIP 9.4 Africa representative and is currently a member of UNESCO/Netexplo Advisory Board.