Policy concerns with digital ID in Kenya: a report back on the KICTAnet digital ID meeting

In  the popular setbook, The River and the Source, Margaret Ogola takes us through the acquisition of identity among the Luo people of Kenya. Children are named after events surrounding their birth, natural and supernatural. As they grow, they acquire other names according to their character. At initiation, they become adults and take up a new identity that evolves at marriage, parenting, leadership and other adult life events. The protagonist in the first part of the book, Akoko, has various names and multiple identities. She passes down her persona to her descendants, who are featured in subsequent parts of the book, hence she is the source of the river.

Akoko was born at the turn of the 21stCentury. In the course of her fictional life, the colonial Kenya government established the first registry of persons. Many older Kenyans describe the registration of persons as “picking an identity with which to be known by government”. They maintain other personas, which are part of their larger identity. These may include affiliations related to age group, religion and profession, identities related to events and so on.  An approximately 70 year old grandmother from Central Kenya sums it thus, “identity belongs to the person. The government only records ones name”. 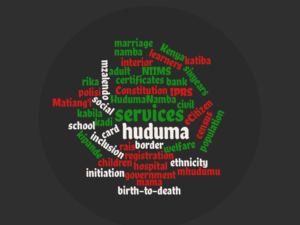 This notion is however changing, with the introduction of digital identification. In Kenya, the government aspires to issue official identification to every person. They also want to collect and centralise identification information, so as to have “a single source of truth”. The latest project, dubbed Huduma Namba (Swahili for service number) involved a mass registration exercise and biometrics of persons above the age of six years are being collected.

Huduma Namba is legally known as the National Integrated Identity Management System (NIIMS), a system for the collection of personally identifying information on persons in Kenya and Kenyans abroad. The system, created under section 9A of the Registration of Persons Act, is designed to collect biometric and demographic data, including deoxyribonucleic acid (DNA) and geographic positioning system (GPS) coordinates. This has raised concerns about the invasiveness and surveillance potential of the system. Although registration is ongoing, the matter is in litigation at the High Court of Kenya.

The evolution of registration and identification of persons was the subject of discussion at a recent workshop organised by the Kenya ICT Action Network (KICTANet). The workshop, held on 20thMay 2019 brought together identity and inclusion experts to exchange ideas with their digital rights counterparts. As a Research ICT Africa fellow I attended the meeting where I presented on the policy concerns with digital identification projects in Africa. These include the concept of digital ID systems, which goes beyond identification of persons, to making the person legible and open to surveillance by the government. Other concerns include a lack of privacy and data protection frameworks; poor governance where citizens are not made aware of the implications of the projects, neither is opportunity provided for their input.  In Kenya’s case where the new system is based on the existing national ID system, those who for historical reasons, have never been issued with the national ID are at a risk of exclusion. This is the case for stateless persons as well as those living in border districts who as described in this report, must undergo rigorous vetting that sometimes takes several years. Overall, there is also worry that African governments have not conceptualised data as an asset and therefore, they have not developed policies to ensure equitable sharing of benefits for citizens from the data.

In Kenya, citizenship is primarily by descent, hence the practice of recording people’s tribe, clan and family affiliations. People from tribes that are not officially recognised cannot acquire official identification, even when their ancestors have lived in Kenya. For example, Nubians are descendants of persons recruited by the colonial British army, in the early 20thcentury. They were settled in Kibra area in Nairobi but have never received official identification. Pastoralists who have migrated in and out of Kenya oblivious of the national borders, never registered for national identification, as many government services were not available to them. The workshop therefore explored the question of how to better establish Kenyan citizenship, while promoting and protecting rights.

In the same way that Akoko and her progeny witnessed drastic changes in Kenya the course of a century, the experts acknowledged the rapid digitalisation of many aspects of Kenyan life. They saw great advantage in issuing every adult Kenyan with official identification but cautioned against adoption of digital ID without full involvement and buy-in from the public. They identified several other recent digitalisation efforts such as the Integrated Population Registry Services (IPRS),eCitizen and National Education Management Information System (NEMIS), and called for safeguards to ensure protection of privacy and other rights. They also asked the government to put in place holistic mechanisms for the digital economy, including developing local capacity for digitalisation. Unlike Akoko’s time where major decisions were made without reference to the people, digitalisation is taking place in a new constitutional dispensation which acknowledges sovereignty of the people. As such, the role of the people in shaping their own destiny must not be relegated to technology. A golden thread in the workshop discussions was that technology cannot be the solution to social problems, but only a tool to be leveraged on to improve service delivery .