After Access: A demand-side view of mobile internet from 10 African countries 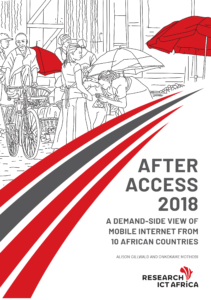 New report: After Access 2018- A demand-side view of mobile internet from 10 African countries by Alison Gillwald and Onkokame Mothobi.

The After Access survey – long made possible through the support of the Canadian International Development  Research Council  (IDRC) and in 2018  by the Swedish International Development Agency (SIDA)  – and conducted by DIRSI in LatAm, LIRNEasia and Research ICT Africa across 22 countries in the Global South during 2017 and 2018– provides some sobering insights into the policy outcomes of three decades of reform. We are excited to be launching Policy Paper No 7. Series 5: After Access_Africa Comparative Report which assessed 10 African countries.

While the liberalisation of markets and introduction of mobile technology revolutionised the lives of people in the Global South enabling millions of people to communicate by phone for the first time and to be financially included through mobile money – dramatically modernising economies and societies – it has been highly uneven.

As we move from simple voice to higher value Internet services this inequity is compounded. By 2018 in many African countries the number of Internet users had not even met the roughly 25% Internet  penetration believed to be the critical mass required to enjoy the network effects associated with economic growth and development.

While broadband network extension remains an issue in several countries, coverage is not the only factor determining connectivity and use of the Internet. In Lesotho, Rwanda and South Africa, to name but a few African countries, broadband coverage stands at over 95% and yet significant portions of the population remain unconnected.

As Internet penetration tracks GNI per capita, South Africa is  the only country in sub Saharan African Africa in 2018 to have an Internet penetration rate above 50% – and the half of the population offline do not look very different from the more than 70% offline in the bigger African markets of Nigeria, Kenya, Ghana and Senegal or the 85 to 90% still offline in Rwanda, Mozambique, Tanzania. And this despite have some of the strongest supply side measures and investments on the continent and amongst the most progressive gender policies.

The barriers to use for many people is therefore not that they are not covered by a signal, but that people do not have the resources to get online– the primary barrier being the cost of devices as well as the price of data.

The After Access survey findings show that affordability of devices and lack of awareness are the main barriers to Internet use in the countries surveyed. Of those who do use the Internet in Mozambique 76% indicated they cannot afford Internet enabled devices Internet despite having amongst the lowest data prices on the continent, while in Tanzania this figures is not much less at 64%, in Uganda,  half the population and in Rwanda just less than half. Of those who do use the Internet 33% of South Africans stated that the price of data is unaffordable.

Similarly, in Ghana and Nigeria, 43% and 40%, respectively, of those who do not use the Internet do not know what the Internet is.

While human development in Africa remains the biggest to dealing with digital inequity, alternative strategies to extend affordable access to communications are urgent. We simply cannot carry on doing things the way we have and expect the exponential changes we require.

The Survey is a mammoth logistical project which would not be possible without the co-operation of institutions and partners in the various countries. Research in Nigeria was supported by the Nigerian Communications Commission (NCC), in Mozambique by the Instituto Nacional das Comunicações de Moçambique (INCM), in South Africa by the South African Domain Name Authority (ZADNA). Fieldwork in Uganda was undertaken by RIA, but facilitated by the Uganda Communications Commission (UCC) and the Ministry of Information Communication Technology and National Guidance, in Rwanda by Rwanda Utilities Regulatory Authority (RURA) and in Tanzania by CosTech. The fieldwork training was conducted by Mariama Deen-Swarray, Dr Onkokame Mothobi and Dr Christoph Stork. The fieldwork was undertaken by A C Nielsen, other than in Mozambique where it was undertaken by Francisco Mabila with the support of Jan Schenk from ikapadata. The latter also conducted the fieldwork in South Africa and supported the fieldwork in Uganda, where it was undertaken by Knowledge Consulting Ltd. The Rwanda fieldwork was undertaken by Anne Muhoza and overseen by Albert Nsengiyumva. The country surveys were supported by the following RIA partners who liaised with local institutions and particularly the national statistics offices to whom we are indebted: Fola Odufuwa, Nigeria; Godfred Frempong, Ghana; Francisco Mabila, Mozambique; Dr. Margaret Nyambura, Kenya; Albert Nsengiyumva, Rwanda; Mamadou Alhadji Ly , Senegal; Onkokame Mothobi, South Africa; Dr Goodiel Moshi, Tanzania; Dr Tusu Tusubira and Ali Ndiwalana, Uganda.