The #DataMustFall campaign is an initiative that was masterfully founded by Mr Molefe with the intention of protesting against high mobile data prices thus being a solution for the average South African and the unemployed, who cannot access mobile broadband services as a result of the high pricing of data bundles. Following its launch and its seeming like a great initiative for the regular consumer, a number of consumer protection agencies gave it the green light, however, on the 18th of November 2016, Molefe deferred from the initial purpose of the campaign and went ahead to use #DataMustFall to advertise MTN postpaid products, regardless of his team’s prior plead to the government to support their movement. Molefe together with his colleague, Gareth had talks with mobile networks and later created their  own hype that there will be a decline in data prices hence sparking great consumer anticipation. So much for raising the consumer’s hopes!   That promise was delivered on the 18th November, 2016 and this is what an average mobile prepaid South Africa had to deal with.

From R160 for 1Gig to R65 and R99 for 2Gig a week. Come on please Stop being ungrateful what more do you want #Datafalling @MTNza

Molefe and Gareth Cliff has forgotten that the majority of South African use prepaid packages. More disturbing is that they seem to have forgotten the core objectives of #DataMustFall.  This is so because the products he is talking about are promotional packages, for contract consumers and these products remain unaffordable to the average income earners and the unemployed South African residents.  The unfortunate thing about Molefe’s claims is that it is likely to sway customers to MTN. Note that the objective of this campaign is to help consumers to churn operators which are expensive. Hence a false statement like this is likely to have more harm on the poor who may hope for a better data prices on their prepaid packages.

Do your calculations 50 Gigs plus 10000 min calls for R149 is R3 for a Gig no network can match this. I challenge them. #MTNcybermonday 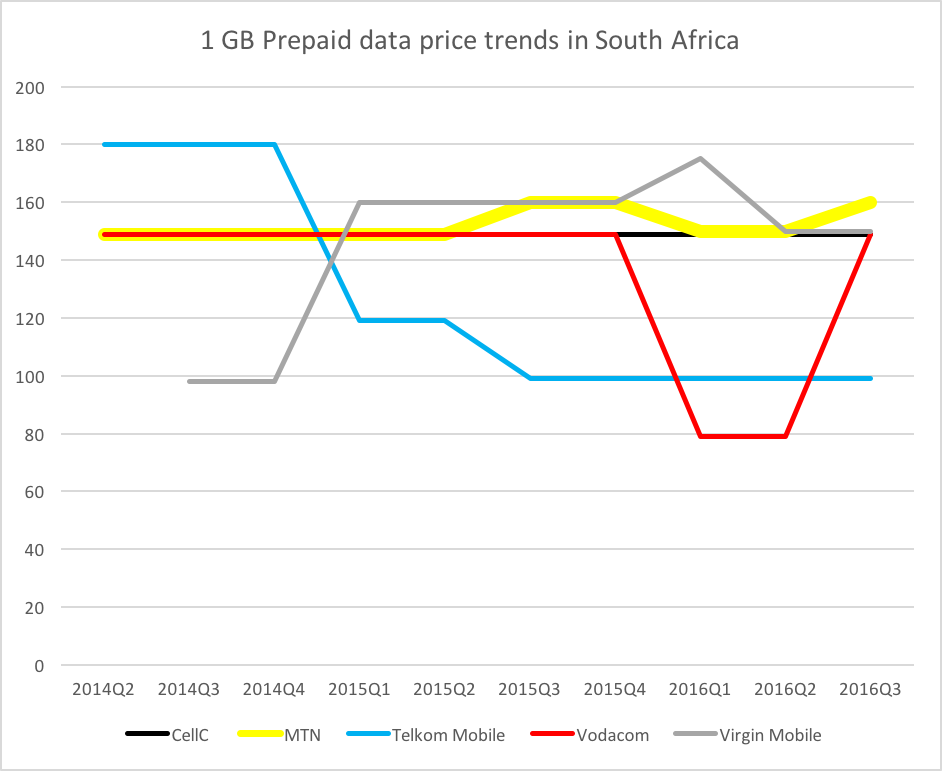 Clearly data prices in South Africa has not fallen and remain high as compared to other countries in Africa. In contrast to Molefe’s #DataMusfFall Campaign, MTN data prices have not fallen. More interestingly MTN is the most expensive operator.