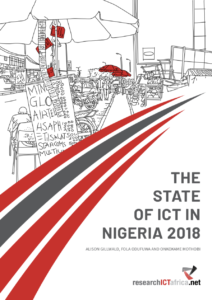 At a time when the ICT sector is most needed to bolster Nigeria’s ailing national economy, thesector finds itself under considerable politicaland regulatory pressure, with the country sliding down global indices and some playerseven preparing to exit the market. After adecade of impressive ICT sector advancement following the liberalisation of the market in2000, which led to its identification as a con- tinental ICT leader, the telecommunications sector in Nigeria over the last three years hasseen negligible network investment reflectingthe decline of the sector. Against the back-drop of the economic recession of 2015/16, a dramatic slump in crude oil prices affected exchange rates negatively and indeed led to high government-set USD/NGN exchange rates, further increasing forex scarcity and constrain- ing sectoral investment. This caused an escalation in the cost of equipment and a reduction in imports on which telecommunications infra- structure expansion depends. Moreover, price wars have driven retail prices down, pleasing politicians and their constituents, but leaving scant profits for the massive investments required to rollout broadband networks as the global communications market shifts from traditional voice services to those of data.

Unpaid industry debt, which has now reached unprecedented levels with one major operator,Etisalat, exiting the market mid-2017, has alsohalted any major investment in the sector inthe last three years. Since 2015, the only major investors have been MTN, which has bought companies with approval from the regulator but subsequently found itself unable to utilise the newly-acquired spectrum from these new deals, and Teleology Holdings, which made a non-refundable deposit to acquire 9mobile (formerly Etisalat Nigeria) from the syndicate of banks which had placed the operator under a local trustee.

Based on the evidence available, as presented in the policy paper, the Nigerian telecoms industry is in crisis and requires significant multi-stakeholder interventions to be undertaken urgently at the highest levels of government and the NCC, to ensure that the gains of the past decade are not significantly eroded. The negative impact of failure in this critical sector on the local economy, and, indeed, on the African continent would be substantial.