Skip to content
Loading...
Previous Next
Dominant operators data prices remain static while SA struggles to get and stay online

Almost half of South African’s (47%) over 15 years do not use the Internet.  This is one of the core findings of the After Access Survey conducted by Research ICT Africa, in 2017. Collecting information on access and use of ICTs in nine African countries, the survey identifies affordability of devices and data services as the main barriers to Internet access and use in South Africa.  Around 36 percent of non-Internet users indicate that they cannot afford Internet-enabled devices such as smartphones and 15 percent state that the Internet is too expensive for them.

This policy brief provides an assessment of data prices and operator strategies in South Africa in comparison to other markets in Africa. Using the RAMP pricing portal, a comprehensive database collecting quarterly prepaid mobile prices, an index for 1GB of data and a voice/SMS basket provides evidence that data prices are indeed high an understandably unaffordable to the poor. To capture the dynamic products offered by operators RIA introduced new bundles in 2018Q1. The new bundles measure the costs of daily, weekly and monthly 100MB, 500MB and 1GB data products. 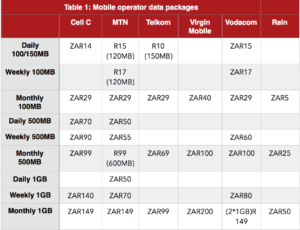